A rare Edo period shakudo kogai, with gold kirimon on nanakoi.   The imperial kiri are 5 7 5, rather than the commonly seen 3 5 3.  The kirimon are slightly different from those on KK0050, and the nanako are better.

From a description of a tsuba (sold by an unschooled dolt),  by Robert E. Haynes in Gai So Shi, page 103 " ... The shichi-go kiri mon has seven blossoms in the center and five on each side.  This is the Imperial form of the mon, and very rare in any design used on fittings.  ... Only a high imperial court official would have been able to have such ... on his sword."

While quite rare, I had been overly ambitious in pricing  a later Edo piece.

The "Five on Seven Paulownia" (五七桐), this flower pattern has been the de-facto and traditionally recognized mon (紋, emblem) used by the Japanese government from as back as the Edo period.

"Traditionally used" since although the single chrysanthemum was recognized as the official Imperial mon in 1869, this one was not.

To the point that in 1884 the Meiji government had to publish on the official daily gazette that the Go-Shichi-Giri mon had never received any particular recognition and that it could actually be used by anyone.

Thus it still exists as a variation within the family of the kiri-mon (桐紋), which in turn belongs to the Go-dai-mon (五大紋), the five emblems that are recognized as being of general and common use.

However, following the tradition, the Go-Shichi-Giri mon is still used by the Japanese government. Most often representing the Prime Minister of Japan.

It is also recorded that the Toyotomi sometimes used this mon.   This go shichi go kirimon is used by the prime minister of Japan.   Ref.  https://en.wikipedia.org/wiki/Government_of_Japan

Comment from Robert Haynes, "These are so rare that I am suspicious when three of them turn up."  As I would be, were they offered as go shichi giri, instead of just kiri mon kogai when I purcashed them   $750 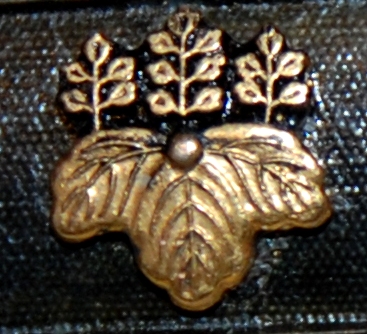